Light On Dark Water Test
Home Archives
The Best of 2019
Can This Be Right?

It Pleases Me To Know That This Exists 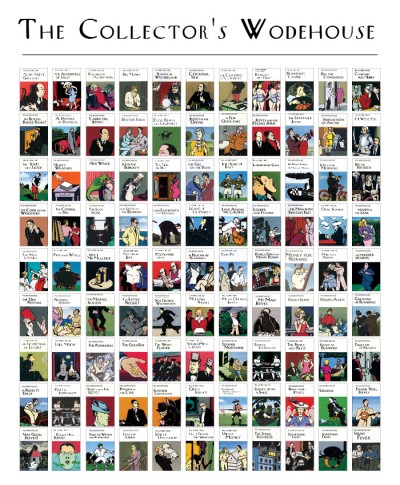 The publisher's description doesn't say, but multiplying rows and columns in that image gives me ninety-nine for the number of volumes. I think that covers all the fiction, though apparently sorting that out is complicated--the order and titles differ somewhat between British and American printings, for instance. This treasure can be yours for only $1975.00, and probably worth every bit of it. I say "probably" because I don't have much acquaintance with Wodehouse's work apart from the Jeeves and Blandings books.

These are very, very nice editions. I have all but one of the Jeeves-and-Woosters, and a few others. I thought I had all the former, but discovered the other day that I lack one, Right Ho, Jeeves, and immediately sat down to order it. I came across this collection in the course of searching for Right Ho. It appears that some of the individual titles, perhaps many, have gone out of print. I hope they won't stay that way.

I first became really fond of Wodehouse some years ago after a rather dispiriting Christmas, when I found that he is a very effective mood-brightener. And now reading one of his books around the holidays is...well, not exactly a firm tradition, but something I do most years. This year I couldn't remember which ones I'd read, so I arranged the shelf in order of publication and read the first one, The Inimitable Jeeves. This holiday season was a little on the extra dispiriting side, so I'm having a second helping, Carry On, Jeeves. This one I have read before, and am enjoying every bit as much on this second reading.

A little quote from Evelyn Waugh is featured on the dust jackets of these editions:

Mr Wodehouse's idyllic world can never stale. He will continue to release future generations from captivity that may be more irksome than our own. He has made a world for us to live in and delight in.

It certainly hasn't staled for me. More of Waugh on Wodehouse can be found here. Also, here is what seems to be an authoritative list of the order in which his books were published, in their British editions as far as I can tell, and very handily divided into separate lists for the series. That was how I found conclusively that I was missing a Jeeves title.

It pleases me too. It's a beautiful edition. I've got price watches on some of these volumes, and when second hand ones comes up in the <$15 range I tend to snap them up. I've been collecting the Jeeves and Blandings novels, for the most part.

In the past few years I've been reading 5 or 6 Wodehouse novels a year, and it's been good medicine for me.

At my age I shouldn’t be collecting books, but I do plan to get the rest of the Blandings stories. The one (or two?) I’ve read were as good as J&W. One of my tactics involves putting them on an Amazon wish list so anyone feeling obliged to give me a present has an easy solution.

Surely one is never too old to buy a book!

I have been greatly enjoying the Blandings books. Just this morning I began reading "Pigs Have Wings". Even the dust jacket's plot blurb is a riot.

Oh, not to buy *a* book, certainly. But to start a long-running collecting project.

I’m pretty sure I’ve read Pigs Have Wings and loved it.

This is only a preview. Your comment has not yet been posted.

The letters and numbers you entered did not match the image. Please try again.

As a final step before posting your comment, enter the letters and numbers you see in the image below. This prevents automated programs from posting comments.

Having trouble reading this image? View an alternate.

(Name is required. Email address will not be displayed with the comment.)