Let's throw in a block quote.

And then go on from there.

Once Upon A Time In Hollywood

This is not the sort of movie that I usually go out of my way to see. As far as I can remember I don't think I've ever seen an entire Quentin Tarentino film, just parts of Pulp Fiction and Kill Bill, more of the former than the latter. Nothing that I've read about his work has made me think I'd like it, though I did find much of what I did see of Pulp Fiction enjoyable. What made me seek this one out was a review which said it was a great picture of Los Angeles in the late '60s.

Continue reading "Once Upon A Time In Hollywood" »

Today's Gospel reading is the story of Lazarus. The daily meditation in Magnificat is a couple of paragraphs from Romano Guardini's The Lord in which he comments on this incident. This in particular struck me:

Jesus stands alone with all that he is, the only one intrinsically alive among so many mortals.... [my emphasis]

You could say that that is the essential fact about Jesus. I only say "could say," not that it certainly is, because one could probably make that claim for other formulations, other declarations about his nature as God and man. But it strikes me as especially decisive. No one else who has ever walked on earth has had life as an intrinsic attribute. Only God does.

You should be able to read the whole meditation at this link. I heartily recommend the book.

This month's Magnificat cover is Rembrandt's depiction of the raising of Lazarus. Or rather a detail thereof: the cover "zooms in" on Jesus, and does not include the figure of Lazarus, which is visible in the painting. 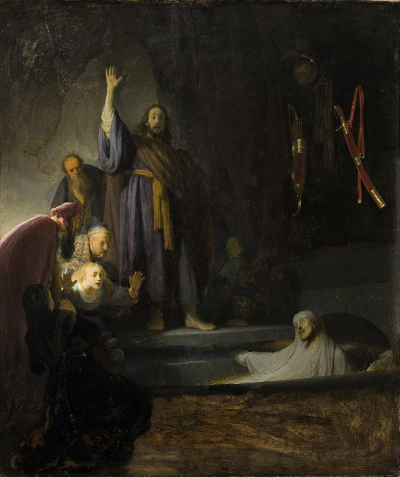 Here's something for you to do at home if or when you are sick of reading, listening to music, and watching movies and TV. (That's meant as a joke. Personally I don't think I could ever get entirely sick of doing those things; each of them separately, maybe, if I couldn't switch to one of the others.)

"Minding Scripture" is a podcast from Notre Dame (University of, not cathedral) in which a group of scholars drawn from the Big 3 monotheistic traditions look at the various scriptures of each from the point of view of their own faith. There is a core group of four Notre Dame faculty members (see this), of whom Francesca Murphy is one, and who are joined for specific episodes by experts in the topic at hand.

When I first heard of this I didn't think it would be my cup of tea; scripture scholarship is not high on my list of interests. Much lower on my list of interests, usually down into the realm of active avoidance, is discussion of "the historical Jesus," which I generally take as suggesting that the Jesus of the Church is, to put it bluntly, imaginary. But out of curiosity I decided to give Episode 2: The Historical Jesus a try, and found it quite interesting, though if I heard correctly, the visiting expert--John Meier, author of Jesus: A Marginal Jew--said near the end that there is almost nothing in the Gospels that we can take as being the actual words of Jesus. I emphasize "if I heard correctly," because I was listening while out for a walk and was crossing a busy street at that point. I never went back to see if he really said that, but even if he did, I don't have to (and don't) buy it, and there were a lot of interesting details about the life and language of the times.

I went from there to Episode 4: The Translation of Scripture, in part because David Bentley Hart is one of the visitors (the other is Robert Alter), and I really wanted to hear what he sounded like. Answer: exactly what I expected. That episode was completely fascinating, and I can recommend it without reservation.

I've listened to a couple of others now, and I don't know that I'll listen to all of them (there are currently seven). But the series is certainly worth checking out; the conversations are both engaging and interesting. Here's the link again.

Since you can't go to Mass today...

(I think this is relevant to all Christians, not only Catholics but at least those whose communions have a liturgy, and worth the attention of those who don't. Or for that matter anyone who cares about the Western musical and spiritual tradition.)

Since you can't go to Mass today, probably, allow me to suggest that you listen to one of the great musical settings of the Latin Mass. One of my Lenten things this year--I can't truly call it much of a penance, but "discipline" is justifiable--is to confine my listening to sacred music. So far that's mostly been settings of the Mass, and, if you do this attentively--not just playing it in the background while you cook or wash the dishes or something--it's more or less inevitable that you will attend very carefully to the words and reflect on them.

So far I've mainly spent time with Bach's Mass in B-Minor, which of course I had heard before, having bought one recording way back in the late '60s (I think) and another in the '80s,  but never really gotten to know. It takes a bit of effort, as the work is something of a monster. It requires somewhere in the neighborhood of two hours to perform, depending on the conductor, and was never performed in Bach's lifetime. And if you're like me you may have trouble listening to two straight hours of non-operatic music (opera has a plot, and characters). But that's ok. The Kyrie and Gloria together run well over half an hour, the Credo most of a half-hour. And each of those sections is a complete musical work as well as theological statement.

My two recordings are pretty much opposite interpretations. You can gather that from the running times: two hours and fifteen minutes for one, an hour and forty-five for the other. The slow one is the one I bought when I was in college: Otto Klemperer, the BBC Chorus, the New Philharmonia Orchestra, and an all-star group of vocal soloists including Janet Baker. The faster one is John Eliot Gardiner, the Monteverdi Choir, the English Baroque Soloists, and vocal soloists whose names I don't recognize (not that that means much, except that they aren't superstars). (I don't know why an orchestra calls itself "Soloists".)

The Klemperer is rich and majestic. The Gardiner is clear and lively. The former is, to speak very loosely, more or less in the more or less romantic tradition of Bach performance, while the latter is pretty much a textbook example of what's called the "HIP" approach--Historically Informed Performance.  (You can read about it at Wikipedia.) I think the two camps have at times been at war over the past several decades. I know some traditionalists hate the thinner, drier sound of period instruments, and some HIPsters mock the grandiosity of Mahler-ready orchestras and choruses applied to 18th century music.

But I am very happy to have both these recordings. Very happy indeed. The traditional recording brings greater depth (in every sense) to some parts, but the big powerful choir and orchestra sometimes overwhelm the counterpoint or just seem inappropriate, too much. The HIP one is wonderfully clear, but the more somber, heavier parts have less emotional power.

Thanks to YouTube, you can compare them for yourself. Yesterday I listened to the Laudate section of the Gloria four times, twice in each version. (The work is so massive that each idea or sentence in the text gets its own separate composition.) And I really like both. This is one part where there is, to my taste, no definite preference. I really like the light, bright quality of the Gardiner. The singer, compared to Janet Baker, sounds almost girlish, which for this section is appropriate, as is the sprightly tempo. But the violin obbligato, which is beautiful in the Klemperer, is anemic in the Gardiner. And so on.

I'm speaking as if you only have to take your recording off the shelf and put it on. But if you don't own one maybe you subscribe to one of the streaming music services. Or you can listen to one of the many recordings, whole or partial, that seem to be available on YouTube. If your knowledge of the Latin texts is no better than mine, and you don't own a recording which would typically include the texts, you'll probably need something you can read. You could start here and find the parts.